Understand Why do we even need archive user license

2. What is Archive User SKU?

How much would it cost and how you can save money?

What happens when you assign archive license to user.

Understand the difference between suspended & archived

Instructions on how to archive / unarchive individual users

Instructions on how to archive multiple users via CSV file.

Archive users based on their Org Unit membership.

Get answer to FAQs, or ask if you have any question.

Why do we need G Suite Archive User?

Instead of straight away jumping to G Suite Archive SKU as a solution, let us first discuss the problem to understand why do we even need something like it in the first place?

Employees join and leave your company, this is a part of business lifecycle, everyone at some point leaves an organization for a better opportunity.

However, these former employees usually leave behind lots of valuable data that can be in the form of emails, documents, chat, video recordings etc.

As a business you need to keep this data for future references whether to get some insights from it OR to mere meet your data retention compliance.

So, as a G Suite customer, you use Google Vault, which helps you retain all of this valuable data.

(Note – If you are not familiar with Google Vault, consider learning about it in this Definitive Guide to Google Vault)

So far so good.

To retain your former employees data in Google Vault, you need to keep their G Suite license, and it costs you same amount of money as they are still active users.

So what do you do? How do you retain their data but without paying equal money as your active G Suite users?

As we now understand the problem at hand, let’s discuss how archive user SKU can help us save money on our G Suite licensing along with securely retain our former employees data.

What is G Suite Archive User?

In this section, let’s cover cost of G Suite Archive License SKU, and how you can save on licensing by choosing the right type of licenses for archiving users.

G Suite Archive license comes in two flavors (business and enterprise) which can be assigned respectively to former employees, and I will talk about it in great details in our AU license assignment section.

You should contact your Google sales rep OR G Suite reseller to understand the pricing in details.

Which archive user license should you purchase?

So you might have seen above that archive user license should be respective to the license which you had assigned to your former employee.

For e.g -:  Your former employee had G Suite Enterprise license assigned, then you would (ideally) be assigning him G Suite Archive – Enterprise).

I mentioned “Ideally” for a reason, though nobody can stop you to assign a lower level archive license but thats not recommended.

So let’s say you had assigned G Suite Enterprise license to your user who is now leaving your company, though you can assign him “G Suite Archive – Business license” too, but then you will not get enterprise functionality on this user, e.g your DLP policies will not be applied to this archived user.

How do you purchase G Suite Archive User Licenses?

I invested some time on G Suite pricing page to find an option to purchase archiving licenses online, but it seems Google does not sell them this way.

Google Support documentation however suggests to talk to Google sales team for it, or you should be able to contact your G Suite reseller to buy these licenses.

If you are not yet engaged with a Google partner, you may consider exploring Google’s Partner Directory.

Before archiving users, let us first understand its impact, and get clarity on what exactly happens when you assign G Suite archive license to a user.

This is what happens when you assign G Suite Archive User license to a user.

If you are wondering how does an archived user compare to suspended user, let us discuss it in this section.

Archive user is kind of identical to suspended user, however it helps you save substantial amount of money, here is the table showing couple of minor differences between them.

In this section, let us explore ways to assign G Suite Archive License SKU to our users including 1:1 and bulk assignment.

There are a few ways to assign (and unassign) archive user license sku to users, I will cover all of them in this section-:

Note -: At the time of writing this guide, Google does not provide a way to assign archive licenses via Google Cloud Directory Sync (GCDS), however I will update this post whenever/if that happens.

Assuming you have already procured archive user SKU, let me show you how you can assign to the required user right from G Suite Admin Console-:

To Archive a G Suite -:
1. Login to G Suite Admin Console
2. Go to Users
3. Click on “More” in front of the user whom you want to archive (as shown in the screenshot below)

4. From the options, select “Archive User” as shown in the screenshot below.

You can also archive the user from the individual user profile page as shown in the screenshot below.

2. Gogole will now show you the pop-up mentioning what would happen once you unarchivethe user, read through it, and if satisfied, click on “Unarchive”.

3. Now you will see a confirmation message at the bottom of the screen saying “Username has been unarchived”.

In this section, let us explore way to archive (and unarchivd) multiple G Suite users at once via uploading a csv file.

1. Login to G Suite Admin Console and Go to Users

2. Click on “Bulk Upload Users” as shown in the screenshot below.

3. Attach your csv file as explained above, you can also use this
Google sheet Archive User CSV template.
— Once you attach your archive user file, click on upload.

4. You will now see the progress in “Your Tasks” as you see in the screenshot below.

— Depending on the number of users in your archive user csv file, it may take a few seconds to minutes, and once complete, Google will show you the result (e.g success or error) along with option to download the log file.

You CSV file should have two columns-:

Column 2 – New Status (this should contain the word Active).

Your final CSV will look like the following one-:

If everything goes fine, you would see the success message in the tasks (as shown here), and all your users in csv will be unarchived.

In this section, I will show you how you can leverage Directory API to automatically assign Archive User SKU to users based on their Org Unit membership. 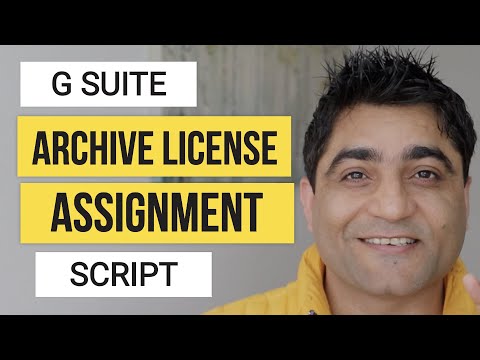 You might be familiar with automatic license assignment feature in G Suite, all you have to do there is to select your organization unit and assign a specific license.

Then onwards, once a new user is either created or moved in that Org Unit, Google will automatically assign license to him/her.

Above feature is great, but unfortunately it does not work with “G Suite Archive User SKU” :(.

However, we can leverage Google Apps Script to automate it, essentially our workflow will look like this-:

1. Get a list of all the users in our required Org Unit (e.g Archived_Users).
2. Search for unarchived users in this list.
3. Archive all users who are active.
4. Create a trigger (cron job) to run a function which does #1,2 and 3.

Here is a flow diagram to understand it better-:

Here am listing some of the frequently asked questions about G Suite Archive User SKU, if you have any question, please comment in the bottom, and I will add it (along with the answer) to FAQs.

How we deal with it if we use Google Cloud Directory Sync?

As of today, Google does not provide option to assign (or unassign) G Suite Archive license via Google Cloud Directory Sync (GCDS).

However, You may consider following as a prospective solution for now-:

Please watch the video above where I show how you can exactly do that with Google Apps Script (I have provided the script as well for you to copy and use).

Is it possible to create users with Archive User License?

It is not, and unless am missing something, it does not make sense either.

Why would you create a user with archive state?

You can only assign Archive User license to an active G Suite Business OR G Suite Enterprise user.

Will G Suite license be assigned automatically upon unarchiving?

If the concerned user is part of an Organizational Unit which has automated license assignment turned on, then yes, license will be assigned automatically upon unarchiving the user, otherwise not.

Can we migrate data from Archive User?

Your requirement -: Our user has left, we have assigned him an archived license, but we want to migrate his data to some other G Suite user in our domain, how can do that?

You can do that, but let me explain it a bit.

IMAP stops working (even if it is enabled) for archived user, so to migrate archived user’s data, you have 2 options-:

(ii) Use any 3rd party migration tool which migrates via GMAIL API instead of IMAP, prominent ones are Migrationwiz and Cloudmigrator.

What is the difference between VFE and AU licenses?

I would like to know what is the difference between VFE (Vault Former Employee) license and AU (Archived User) license apart from the point that AU costs the company.

Like what more does AU offers which VFE doesn’t? Anything special in terms of vault retention and auditing?

Also, when we migrate a user from VFE to AU, what are the changes we see?

I think VFE was more like an adjustment, but AU is a well planned SKU.

AU allows you to do a bit more, like running DLP scans which you can’t do with VFE.

No difference between the retention policies as they are still controlled by Vault on both.

You would need to manually assign AU licenses to users when migrating from VFE, though AU can’t be handled with Directory Sync for now, but Directory API has a property called isArchived = true or false which you can leverage to do this in bulk (script is provided in this post above).

VFE would also be going away, and AU would be streamlined to manage leaving users data, so it can also be considered as an upgraded version of VFE.

When a user gets archived in G Suite, does their GCP SSH keys get removed/revoked?

I tested this, I SSHed into my GCP linux instance, and then archived this G Suite user, in less than couple of minutes I lost connection to the instance.

I started seeing this message then and couldn’t reconnect to the instance-:

Transferring SSH keys to the VM.

The key transfer to project metadata is taking an unusually long time. Transferring instead to instance metadata may be faster, but will transfer the keys only to this VM. If you wish to SSH into other VMs from this VM, you will need to transfer the keys accordingly.

Click here to transfer the key to instance metadata. Note that this setting is persistent and needs to be disabled in the Instance Details page once enabled.

You can drastically improve your key transfer times by migrating to OS Login.

Also, ideally I think recommendation would be leverage os login to give ssh

I have a question, what should I do?

Ask it in the comments below, and I would try to answer it (if i can) as soon as I get time.

Made with love for G Suite:)